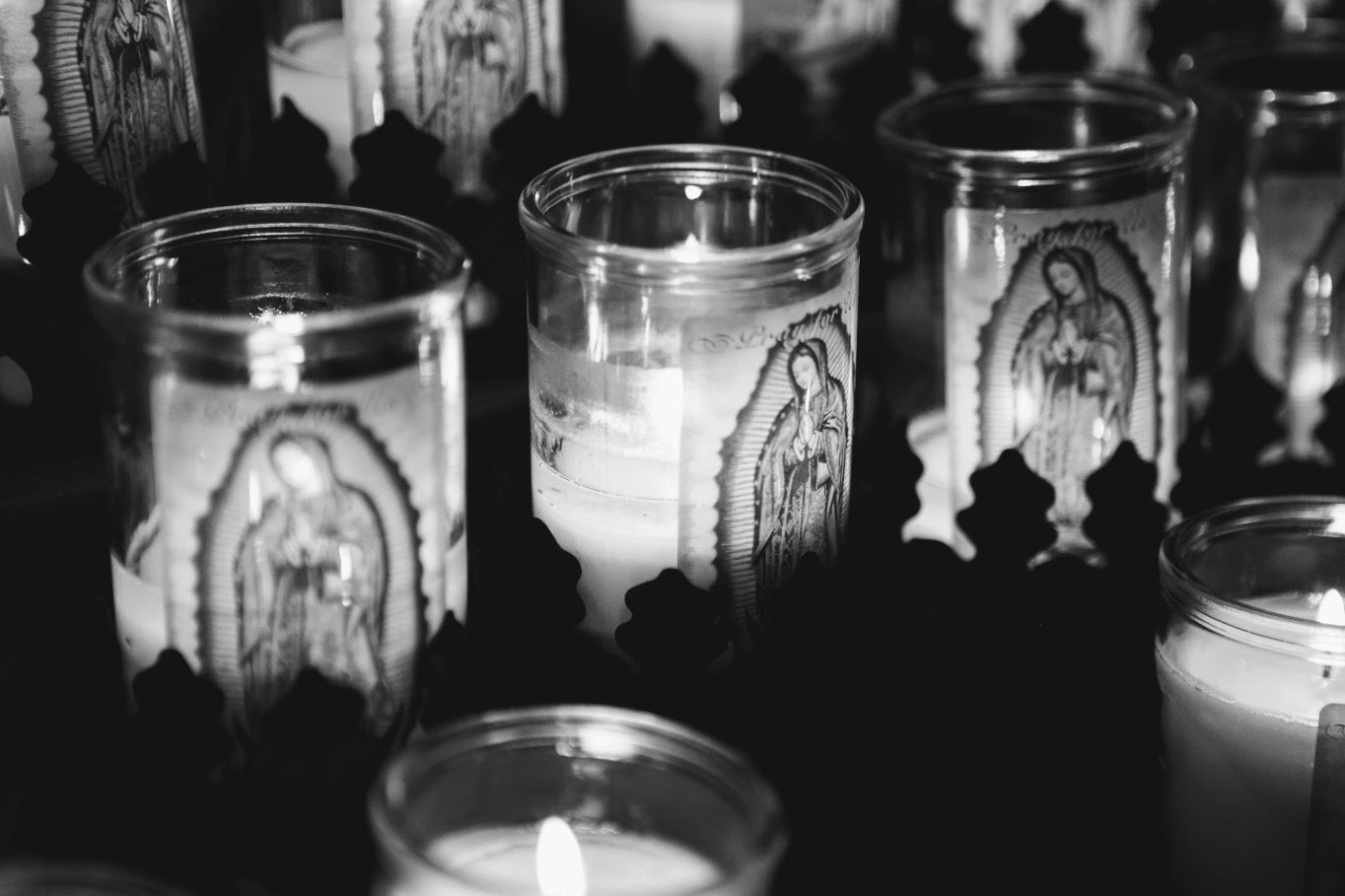 The Virgin of Guadalupe comes to you and me—to Catholic mothers today. We are simple, some of us middle-aged folk like Juan Diego. You and I are living on the “outskirts”—in the home, in the marketplace wearing simple garments: ponchos, heels, or aprons, depending upon our work.

We stand guiding and guarding our homes, and yet with desperate hearts we stand at the crux of a critical time in history. We are living in a culture of death. Life is being destroyed in the womb, and openness to life—even from its origin—is either feared or seen as a threat to successful living. Life is being silenced. The Gospel is being silenced.

Is it hopeless? We look around and wonder at the severity. So, too, did the Aztecs.

The Aztecs spent a season of fasting and offering human sacrifice while practicing acts of self-mutilation—all to ready themselves for their winter solstice on Dec 12th. Leading up to the solstice, their only hope was for the sun’s energy to overpower the darkness. The poignant timing of this apparition of Mary is no mistake. God was reaching down through history and stirring the transcendent desire he put within human hearts—the desire to engage in the fullness of life found in Christ.

God sends Santa María de Guadalupe to a simple, middle-aged peasant just like you and me, living on the outskirts, to bring her maternal message of truth. She stands upon the moon, in front of the sun, displaying superiority over the elements of nature that the Aztecs venerated as deity. Simultaneously, she shows submission to Creator-God by reflecting Jesus, the Christ-Child within her. She is poised in the humility of prayer—she is looking to God in whom she finds her very essence and peace. Her knee is seen bent, symbolizing the motion of life—of serving, of dancing, of moving forward as an agent of revolutionizing unity and victory.

To Juan Diego the Virgin proclaims, “I am the ever-Virgin Mary, Mother of the True God.” This is no small statement! She, like the woman of Revelation, is overthrowing the false gods and the forces of evil. She mirrors the woman in the book of Revelation. A great sign appeared in the sky, a woman clothed with the sun, with the moon under her feet, and on her head a crown of twelve stars (Rev 12:1). The woman depicted in Revelation is definitely a warrior. The dragon of Revelation is scheming to demolish her child upon birth, and yet, miraculously, the child is spared. To the Aztecs the moon symbolizes the greatest force for evil, and the Guadalupe Mary shows forth her victory over evil by standing on the moon.

It is no small wonder that countless miracles of physical and spiritual healing proceeded the apparition at Tepeyac, imbuing the people of Mexico with gratitude and sparking deep devotion. The Virgin was sent to engage in the spiritual battle of death and win the Aztec culture by proclaiming the culture of life.  Human sacrifices came to an end, along with the astounding conversion of at least nine million people—an entire nation.

The Virgin of Guadalupe demands no violence and instead brings us mothers the message of the death and life of Jesus, of the Eucharist—the Gospel of self-giving love. Mary is the radiant reflection of Jesus, the son, the only-begotten one—the forever-sacrifice for mankind. Because of Jesus, we are no longer slaves to fear. We are no longer afraid of life—we have been called to self-giving joy!

The call to us as mothers who honor Santa María de Guadalupe is to ask her to pray for us, to show us the way to vanquish the culture of death. This feast day was not a one-time event. Today is a vital reminder that we must not fear; we must proclaim the joy of life; we must bear the reflection of Jesus in his self-giving, forgiving, merciful love.