Every morning as I fumble around my dresser for my glasses, bleary-eyed, I see the long red and white taffeta ribbons of my mother’s eighth grade graduation rosette hanging next to the mirror. “Sacred Heart School,” proclaims a red one, and “Class of 1945,” a white.

This rosette was one of the few school mementoes my mother, Evelyn, kept. She was sentimental, yet not a keeper—we use the word “minimalist” now. Sacred Heart was the parish and school of the Polish neighborhood—Tolleston– in Gary, Indiana where she was born, and nuns like Sr. Zygnunta, Sr. Virginette, and Sr. Herminegelda taught the students in both Polish and English. My mother was chosen valedictorian of her eighth grade class, and as such, was the leader in the procession of the May crowning of Mary, first in line behind the statue of the Virgin, carrying a crown of fresh flowers adorned with ribbons. Then, the greatest honor, she crowned Mary while reciting the Hail Mary and Salve Regina in Polish.

Mom was lovely, but modest and shy, terrified of making a mistake, though her Polish was perfect. My immigrant grandparents stood by, shedding happy tears, and several days later, when the crown of flowers had wilted, she was presented with the rosette of ribbons, the same one that 76 years later reflects in my bedroom mirror.

May devotions to Mary have early roots in ancient Greek and Roman celebrations of spring and goddesses of fertility. In the medieval 1200’s, May devotions to the Virgin, such as “Cantigas de Santa Maria,” attributed to King Alphonsus X of Castille, appear. Much later, particular devotions dedicated for each day of May became known as Tricesimum. Centuries later, the social chaos of the mid-twentieth century saw the well-timed 1965 publication of Blessed Paul VI’s encyclical Mense Maio, a clarion call to reignite the dying May devotions of faith for Our Lady. Closer to our own times, this clarion call of the church was sealed and exploded into space by Saint John Paul II and his encyclical Redemptoris Mater, delivered in St. Peter’s Basilica on March 25, 1987.

I believe my sweet mother left me more than a memento of her academic triumph. She, with my grandparents, handed down a love for the Virgin Mary that was shared by my dad throughout their fifty-nine years of married life. Mary was alive in our multi-generational home. We said the Rosary, my father hand-carved beads and gave away dozens of oversized rosaries, we made little pilgrimages to the Shrine of the Seven Dolors in the next county. (When I was in high school and my grandma caught me sneaking a cigarette in the backyard, she cried and told me Mary was crying in heaven too, because I was ruining my lungs—so I stopped). There was no talk or question then about worshiping Mary above Jesus. Mary was our direct line to the Savior, the woman who had endured suffering like no other, our True Mother, and simply because we tried to remain as close to her as humanly possible, we knew we would be closer to Jesus.

At the center of this mystery, in the midst of this wonderment of faith, stands Mary. As the loving Mother of the Redeemer, she was the first to experience it: ‘To the wonderment of nature you bore your Creator”! 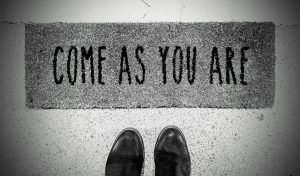