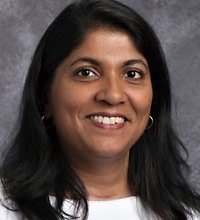 My parents are from India, and I was the first of their children to be born here in the states.  My parents came from good families and worked very hard to provide us with a better life than what they had in India.  They knew that a good education was the ticket out of the poverty that they saw all around them.  In many ways they were pioneers – my mother came on a nursing Visa, and was part of one of the first waves of Indians to come to the states.  My family initially settled in Chicago where they had an extended community of other Indian immigrant families.  But, after learning a certain business model, my parents ventured across the country to start their own business in Houston, where the weather is much more similar to the tropics that they grew up in!

In my childhood, I had a competitive spirit and worked hard to be the best at everything, whether it was the perfect school project or the 1st place winner of whatever competition I had entered.  I had to be perfect.  And I had to learn everything with little guidance . . . including how to be a part of a society without any traditions to fall back on.  My parents naturally did not have the foundation or basis of American traditions that I was surrounded by; they tried to provide a source of tradition in the Indian community, but it was too far removed from our daily life to have meaningful impact.  Nevertheless, we prayed every night as a family.  The roots of faith in our family were strong.

Like so many young children, I had many dreams . . . I wanted to be an astronaut; but I also wanted to be a nun; I wanted to be a doctor; and I wanted to be a missionary.  As my horizons expanded, so did my dreams.  And by the time I reached my senior year of high school applying for college, I didn’t know what I wanted, except that it had to be the best.  I was accepted into three of the four universities that I applied to.  Though the University of Dallas was my last choice, it ended up being the default because my older sisters had gone there and it was the least expensive option at the time.  Now looking back, it was no doubt God’s Providence that brought me there.  This is where the seeds of faith planted in youth came to fruition.  This is where I learned and embraced my faith.  During my junior year of college, I had somewhat of a conversion experience and felt a calling to religious life.  As such, the “signs” that I prayed for were all there and so I made plans to enter a convent after graduation.  I finished my degree at the University of Dallas and entered the religious life that summer.

There were so many graces, and so much pruning that happened during the 14 months that I was in the convent.  I would have to write a book to properly describe and detail the events, inspirations, and amazing love that God revealed during my time there.  But I will say that 14 months there undid 14 years of mal-formation prior, and helped to form me for what He really had in mind.  I still refer to the insights and nuggets of wisdom gained during my time in the convent.  One of the strongest lessons I gained was in understanding what it meant to “Be perfect as your Heavenly Father is perfect.”  God does not call us to perfection in our projects, our competitions, our tasks—this is worldly perfection; He calls us to be perfect in our love.

I did not make vows, but left the convent in order to discern more what God was asking of me.  And, I spent a good amount of time in my twenties trying to figure it all out.  It took me about 5 years, and much wrestling with God in prayer, but eventually I realized that the religious life was not in God’s plan for me.  Soon after coming to peace with this, my now husband asked me out on our first date.

We ended up getting married.  We knew that we wanted a big family, and we both knew what the Church teaches about contraception.  Even though we were open to life, conception just was not happening.  So we took NFP classes in order to figure out how to conceive.  We then had 5 children in less than 8 years, and I was exhausted.  At that point, we referred back to our NFP classes in order to delay any more children.  By the time I was ready to have another baby, it seemed that my window of fertility had closed.

Still figuring it out…

I still struggle, almost daily, with many things.  And I have to regularly refer back to that nugget of wisdom . . . that we are called to the perfection of love.  My husband and each of my children are a tremendous gift, but I have to work on how I love them.  I struggle with anger, with the frustrations of an imperfect house, the messy people who share my living space, with our finances, with some imaginary perfect life I thought I would have, with so many imperfect things.

And so I work each day on trying to love as our Heavenly Father loves.  I work on trying to purify my intentions so that what I do is for Him . . . to serve Him through my husband and children, in my tasks around the home, and in my job outside of home.  Each of them is very different from the others, and they expand my ability to love.

As I began writing this testimony, the verse of the Clint Black song playing on our radio was “Right where I am is where I have to be.”  And in many ways, this sings volumes of my daily struggle . . . learning to love, right where I am – this is what He has called me to do!